Why China is building islands in the South China Sea

“China is building islands in the South China sea and its causing disputes among the other nations in the region; Malaysia, the Philippines, Brunei, Vietnam, and Indonesia. China claims they aren’t military bases, but their actions say otherwise. The US has many allies in the region and uses its massive Navy to patrol international waters, keeping shipping lanes open for trade.”

Last year this was an intriguing story but now the geopolitical drama is growing as more countries are literally building islands out of reef outcroppings to strengthen their claims to the South China Sea.  For some without geographic expertise, this might some baffling.  For those that understand Exclusive Economic Zones, maritime claims, and expanding geopolitical aspirations, this makes perfect sense. 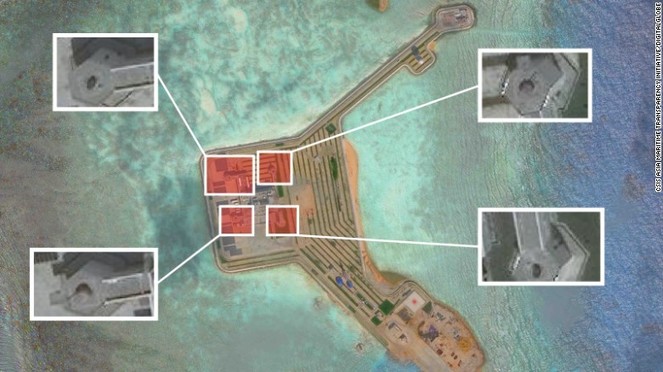 New satellite imagery indicates that China has installed weapon systems on all seven artificial islands it has built in the contested waters of the South China Sea, a move that’s likely alarm the country’s neighbors.

UPDATE: After this news, the Pentagon says a Chinese warship has seized a US Navy underwater drone collecting unclassified data in international waters in the South China Sea.

What China Has Been Building in the South China Sea

China has been feverishly piling sand onto reefs in the South China Sea for the past year, creating seven new islets in the region. It is straining geopolitical tensions that were already taut.

Last year this was an intriguing story but now the geopolitical drama is growing as more countries are literally building islands out of reef outcroppings to strengthen their claims to the South China Sea.  This is the most comprehensive article that I’ve seen on the escalating situation.

Digging In: Land Reclamation and Defenses in the South China Sea

The U.S. Department of Defense’s latest assessment of the Chinese military provided new detail on China’s land reclamation efforts on several of the islets that it occupies in the South China Sea. These include Fiery Cross Reef, Gaven Reef, Johnson South Reef, Mischief Reef, and Subi Reef in the Spratly archipelago. By December 2014, the report estimated that China had reclaimed as much as 500 acres of new land, creating full-fledged islands where only coral reefs or sand spits existed before. Since then, China has only accelerated its efforts, expanding the total land area that it has reclaimed to 2,000 acres and building military facilities, ports, and at least one airstrip on the islands.

We’ve heard in the news recently that China is reclaiming land from the South China see to presumably construct an air strip to strengthen their claims in the region.  China is not alone in this…

Satellite images show China is making progress on building an airstrip on a reef in disputed territory in the South China Sea, a report says.

So that’s what they are up to…hmmmm.

Questions to Ponder:  Why is China building up this island?  What advantage would that give them?  Why aren’t other countries with competing claims stopping China?

Satellite photos show the speed, scale and ambition China has exerted to assert ownership over South China Sea islands, far from the mainland.

In addition to the original BBC article, here is another article from the Telegraph with some aerial imagery showing the extent of this geo-engineering project.  This has plenty of geopolitical implications and the United States government is on record saying that it is “concerned.”

Questions to Ponder:  Why is China building up this island?  What advantage would that give them?  Why aren’t other countries with competing claims stopping China? 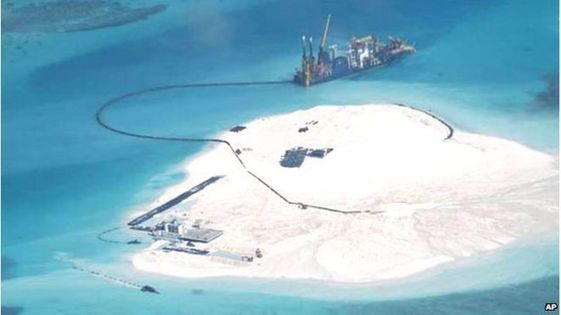 The scale of China’s land reclamation in the South China Sea is leading to “serious questions” on its intentions, a top US official says.

China is building artificial land by pumping sand on to live coral reefs – some of them submerged – and paving over them with concrete. China has now created over 4sq/km (1.5 sq miles) of artificial landmass.  China is creating a great wall of sand with dredges and bulldozers over the course of months.

UPDATE: In addition to the original BBC article, here is another article from the Telegraph with some aerial imagery showing the extent of this geo-engineering project that has plenty of geopolitical implications and this has the United States “concerned.”

"The Philippines’ oldest newspaper recently made what could be considered a provocative gesture towards China regarding its notorious nine-dash-line."

I’ve shared some more substantial resources about maritime claims in the South China Sea than this flippant political cartoon.  Still, this cartoon beautifully illustrates a geopolitical perspective quite powerfully.  As always, use your own discretion when sharing resources in your own classroom (my college students love this).

ONE reason China’s spectacular rise sometimes alarms its neighbours is that it is not a status quo power. From its inland, western borders to its eastern and southern seaboard, it claims territory it does not control.

Many of the geopolitical conflicts in the East Pacific have their roots in the territorial disputes over islands that at first glance seem as if they wouldn’t be worth the trouble; how did this become a tense situation?  Since the UNCLOS agreement gives countries 200 nautical miles off their coasts to be an Exclusive Economic Zone, that greatly enhanced the strategic value of controlling these islands and the shipping lanes.  The United States, to counter Chinese claims, has used the Navy to go near some of the claimed (and reclaimed) islands recently.  This interactive map briefly highlights some of the details behind the conflicts with links for further readings.

Questions to Ponder: Why do countries care so much about some minor islands?  Why would other countries not want to accept China’s territorial assertions?

China has published a new map of the entire country including the islands in the South China Sea (West Philippine Sea) in order to “better show” its territorial claim over the region.

China is attempting to bolster its geopolitical claims through cartographic validation.  It as if to say, ‘it’s on a map, who can question that it is legitimately our territory?’  Why is a map such a powerful and convincing document?  Why is the Philippines upset by this map?  I think that explains this rival Filipino map as the Philippines and China engage in the cartographic version of dueling banjos.  (note the uage of the South China Sea or West Philippine Sea to refer to the same body of water) .  But this is more than just a map; it’s production has the potential to destabilize regional security.

For more resources, the Choices Program has put together supplemental materials to investigate China on the world stage.