A tour of the world’s engulfed and orphaned places.

This storymap is a full length article about all the intricacies about enclaves and exclaves, but the interactive format, visuals and maps really make this much more than another article on the topic. 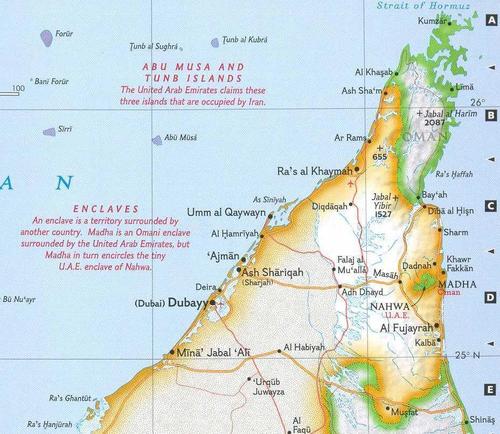 A website that examines the geographical enclaves of the world

This website is an exhaustive list with information on the world’s enclaves that are so often entangled in geopolitical issues. 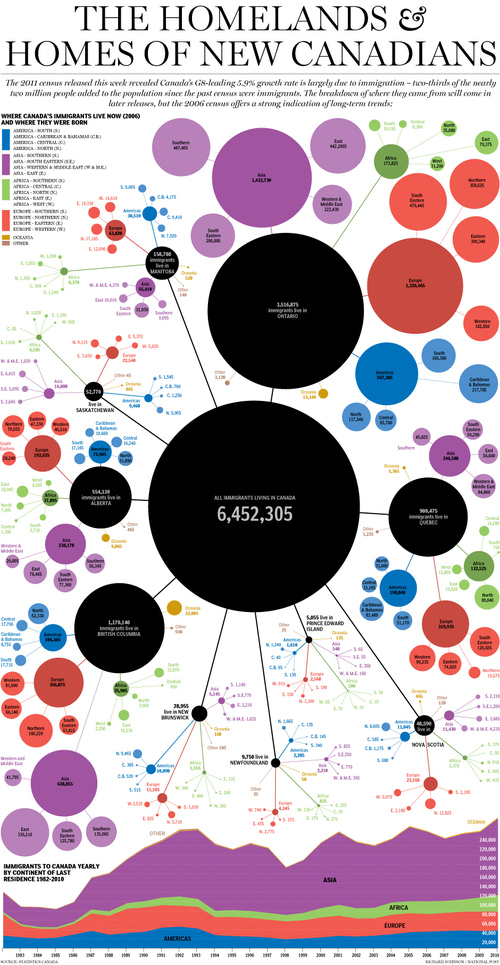 More than 600 newcomers per day have arrived in Canada since 2006, and many of them have settled in neighbourhoods like Richmond, B.C.

Over 6 million of those living in Canada were born outside of Canada an migrated there.  This infographic cleverly outlines both where migrants live in Canada and where they came from.  Ethnic enclaves are an important part of Canada’s rural and urban cultural landscapes.  Since the 1960s, the majority of immigrants have come from Asia, changing some traditional neighborhoods.

Conflict in Armenia and Azerbaijan

There are many simmering conflicts around the world that are not fully resolved but that can intensify very quickly because the underlying issues remain tense even in periods of relative calm. The Armenia/Azerbaijan conflict centers around the ethnic Armenian enclave (Nargorno Karabakh) inside Azerbaijan. To make things more complicated, there is an exclave of Azerbaijan (Nakhchivan) to the west of Armenia.

There have been ethnic/political tensions is this region for generations, but the collapse of the Soviet Union changed the status quo, and there was a cease-fire called in 1994, but that has dissolved in the last few weeks. Now, Turkey and Russia are both seeking to resolve the dispute (or carry out their regional ambitions if you like to approach this more cynically). This shows how a border conflict between two countries can quickly become a broader that can polarize the international community as countries “pick sides” in the conflict. While this is a distressing bit of news for global security and peace, this is a excellent case study to explore many political geographic topics; enclaves, exclaves, borders, sovereignty, devolution, international conflict, etc..

Petition calls for U.S. to give Northwest Angle to Canada

"There’s a petition that calls for the United States government to adjust the border near Manitoba to give Canada the geographic oddity known as the Northwest Angle."

Enclaves and exclaves are often bizarre examples that test the normal rules regarding the political organization of space.  Historical quirks, landform oddities, competing national goals, and irregular demographic patterns mean that the world is filled strange little case studies about places that seem to defy our normal expectations.  However, the most enduring rule seems to be this: never voluntarily give up territory that you can easily control.

Inside North Korea’s bubble in Japan

"Why North Korea has children’s schools in Japan. This isn’t a story about a physical border. North Koreans living in Japan experience a much less visible kind of border, one made of culture, tradition, history, and ideology. The result is a North Korean bubble in Japan whose members face fierce discrimination from Japanese society, leading the community to turn to Pyongyang for support. Now that community is being tested like never before. North Korea routinely threatens to destroy Japan with nuclear weapons, prompting a spike in Japanese nationalism. Japanese politicians are feeling increasing pressure to crack down on this North Korean bubble, creating a battleground in the most unlikely of places: schools."

This episode of Vox borders offers some excellent insight into a cultural enclave that feels deeply connected with a totalitarian regime.  From the outside, this raises so many questions, but understanding the cultural, historical, political, and economic context shows how this peculiar community continues.  The entire series of Vox Borders is fantastic material, dripping with geographic content.

Political Bubbles and Hidden Diversity: Highlights From a Very Detailed Map of the 2016 Election

The Times’s interactive map of precinct results shows that even within partisan strongholds, there are contrary-voting enclaves.

This feature that shows the 2016 election results at the precinct level is astounding, revealing, and a testament to the difficulty of putting all this information together.  The built-in features in this interactive map to explore selected “voter islands” and one-sided places are especially helpful, but much like Google Earth, many people are eager to zoom in to their own neighborhoods.  The article that accompanies the interactive had some excellent case-studies at a variety of scales.  Geography always matters and the maps reveal so many telling patterns.

Reports from Aleppo have been particularly harrowing for the past month, as Syrian government forces, supported by Russian airstrikes and Iranian-backed militias, have squeezed the remaining rebels out of the eastern portion of the city. The collapse seemed to come all at once, with fighters loyal to Bashar al-Assad making more territorial gains in the city’s rebel enclaves since mid-November than they had in the previous four years since the opposition first seized it.

As the offensive reached its final stages this week, the United Nations received reports of massacres of civilians; a spokesman for the UN high commissioner for human rights said women and children had been shot trying to flee.

During the fighting between the Assad regime and the rebels, ISIS has taken advantage of the situation to recapture Palmyra.

Why India and Bangladesh have the world’s craziest border

On July 31st India and Bangladesh will exchange 162 parcels of land, each of which happens to lie on the wrong side of the Indo-Bangladesh border. The end of these enclaves follows an agreement made between India and Bangladesh on June 6th. The territories along the world’s craziest border include the pièce de résistance of strange geography: the world’s only “counter-counter-enclave”: a patch of India surrounded by Bangladeshi territory, inside an Indian enclave within Bangladesh. How did the enclaves come into existence?The enclaves are invisible on most maps; most are invisible on the ground too. But they became an evident problem for their 50,000-odd inhabitants with the emergence of passport and visa controls. Independent India and Bangladesh—part of Pakistan until 1971—each refused to let the other administer its exclaves, leaving their people effectively stateless.According to Reece Jones, a political geographer, the plots were cut from larger territories by treaties signed in 1711 and 1713 between the maharaja of Cooch Behar and the Mughal emperor in Delhi, bringing to an end a series of minor wars.It was partition, the division of India and Pakistan, that turned the enclaves into a no-man’s-land. The Hindu maharaja of Cooch Behar chose to join India in 1949 and he brought with him the ex-Mughal, ex-British possessions he inherited. Enclaves on the other side of the new border were swallowed (but not digested) by East Pakistan, which later became Bangladesh.

As South Carolina deals with its Confederate flag, one town in Brazil flies it with pride

After the Civil War, members of the Confederacy fled to Brazil. Their ancestors still live in the region and continue to fly the Confederate flag.

While people debate why the southern states actually seceded, there are many who still honor what they see as the gallantry of genteel southern society in the Southern Hemisphere.  It is important to note that Brazil was chosen as the home of this ‘Confederacy in Exile’ because it was the last western country to abolish slavery (1888 it ended there too).  Here is another article discussing the the Brazilian enclaves of ‘Confederados,’ or children of the unreconstructed South.