When I was in my late 20’s in a college town, I was struck by how female pedestrians responded to my presence based on who was with meat the time.  When I was on a walk with my 1 year-old daughter, I was perceived as a kind and loving father, but when I was alone, they would often brace themselves and not make eye contact with me.  I was the same person of course, but how they perceived me (benign or as a threat) changed how they navigated through space.  How we move through space is based on many cultural norms and many of those norms and assumptions are based on gender.

When two people are both walking in the same path, who moves first?  I had never given this much thought but there is a cultural assumption that men have a greater right to occupy public spaces more so than women–ladies “should” step aside if they don’t want to be jostled.  If you are skeptical of this claim, read this article.  In it a woman asks the question “what happens when a woman walks like a man?”  The answer: many more collisions in the streets.

My sister is doing an experiment: Whenever men walk towards her, she doesn’t move out of the way first. So far she has collided with 28 men.

Of course not all men walk in an unyielding fashion and not all women are submissively darting out of the way, but the what is seen as more normal?  Public space has historically been masculinized and women often are marginalized in spaces, but also in terms of how much space they culturally feel they are are allowed to occupy. 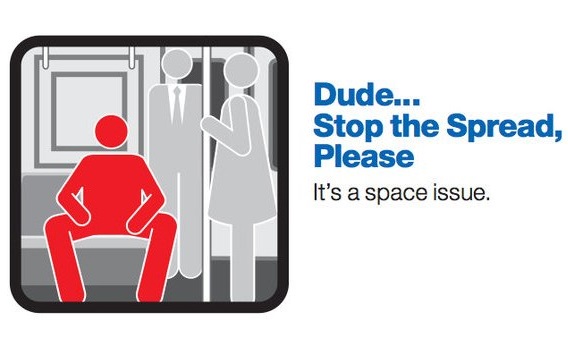 Here is a humorous account one woman who is demanding her space against “manspreaders” on subways and other places with limited seating.  DISCLAIMER: The link above and video below contain language that might not be appropriate for your classroom.  The video is from the Daily Show, so expect some salty language and inappropriate humor.

Everyone should be polite and courteous, but these are a few glimpses that show that spaces is gendered and (not surprisingly) more difficult to navigate for women.