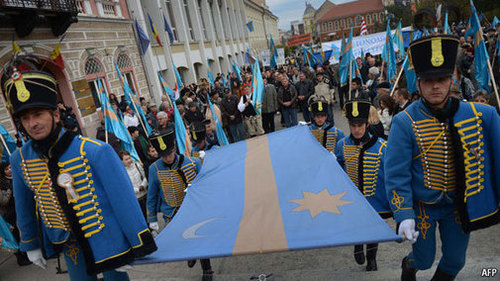 “Mr Füzes had voiced support for the Székler people, a group of ethnic Hungarians who live in Transylvania, after two Romanian counties banned the display of the Székler flag (pictured above with men in hussar uniform) on public buildings. Zsolt Nemeth, Hungary’s state secretary for foreign affairs, described the ban as an act of “symbolic aggression” and called for local councils in Hungary to show solidarity by flying the Székler flag from town halls. The Hungarian government then raised the Székler flag above Parliament, further enraging Bucharest…”

Flags are important symbols of cultural identity and displaying them can be a strong political statement.  For Hungarians, displaying symbols of a “Greater Hungary” shows some desire to for irredentism–to redeem Hungarians of the ‘wrong’ side of the border.  For those Hungarians in Romania this is an act of defiance that show that they want greater autonomy.

For sports fans, ESPN did a “30 for 30” documentary on the early 90’s Yugoslavian basketball team that was a major talent (1990 World Champions) but was torn apart as devolutionary forces fractured the countries and the once-teammates were estranged after what some perceived as disrespectful acts to the Croatian national flag.  Vlade Divac (a Serbian) was pitted against some of his best friends from Croatia as the civil war was playing itself out on the court as well.  This is a great way to get a sports fan to learn about ethnic conflict and cultural symbols (“Once Brothers”–$1.99, free for Amazon Prime users). 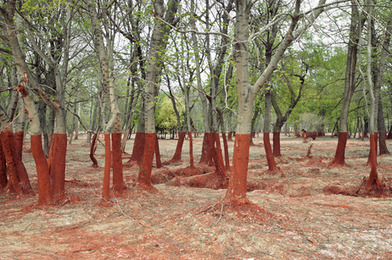 It’s not two photos stitched together, and it’s not an installation. This red line is the stain of toxic sludge.

This is a great issue that highlights the human-environmental interactions theme.  In 2011, this site in Hungary witnessed a horrific toxic sludge spill at an aluminum oxide plant that literally created a toxic mudslide.