“The Braves chose to relocate to Cobb County from downtown Atlanta’s Turner Field after only 19 years because of a $400 million public subsidy from Cobb taxpayers. The costs are almost certain to balloon thanks to some significant fiscal buffoonery on the part of Cobb officials, including a lack of a comprehensive transportation plan and forgetting to ask the Braves to pay for traffic cops. Attached to SunTrust Park like a Cinnabon-scented goiter is the Battery Atlanta, a $550M mixed-used development that looks an awful lot like a New Urbanist project, the widely criticized school of planning that is equal parts social engineering and neoliberalism. SunTrust isn’t solely accessible by car—the Braves run a stadium shuttle bus that serves a couple of outer MARTA stations—but, compared to the team’s former home, the non-motorized options are paltry.”

There are many great geography angles to look at this particular issue.  The scale of governance matters in creating the political context for any given situation.  In this article, we see City vs. County vs. Metropolitan regional politics jockey for position, putting the interest of their own county above that of the larger metropolitan region.  We also see competing visions of ideal urban planning (a more sprawling, automobile-centered model vs. public transit, multi-use planning that is enclosed vs. open) all layered upon racial and socio-economic context of this particular place.

How do we solve the problem of the suburbs? Urbanist Jeff Speck shows how we can free ourselves from dependence on the car — which he calls “a gas-belching, time-wasting, life-threatening prosthetic device” — by making our cities more walkable and more pleasant for more people.

In the 2017 APHG exam, there was a question that dealt with new urbanism and walkability.  This TED talk from Jeff Speck gives a good sense of what planners believe in new urbanism are trying to do (you can also watch his earlier TED talk, 4 ways to make a city more walkable). Here also is information on New Urbanism (dot org) from it’s practicioners, such as the Congress on New Urbanism.  Lastly, here is an academic article reviewing the critiques of new urbanism with rebuttals.

Amazon’s zero-profit strategy is a disaster for anyone who goes up against it.

I have more questions than definitive answers, so let’s get right to it.

Questions to Ponder: How have technological and logistical shifts in various industries made this once unthinkable union workable?  How will a retailer like Amazon change the food industry on the production side of the equation? What are the advantages and disadvantages of creative destruction (eliminating old jobs by creating new ones)?  Who stands to benefit the most, and who are the most negatively impacted?

As the 2017 APHG exam has ended, some people have asked for more resources on new urbanism.  This TED talk from Jeff Speck gives a good sense of what planners believe in new urbanism are trying to do (you can also watch his earlier TED talk, The Walkable City).  Here is information from New Urbanism (dot org) from it’s practioners, including the Congress on New Urbanism.  Lastly, here is an academic article reviewing the critiques of new urbanism with rebuttals.

“New Urbanism is a planning and development approach based on the principles of how cities and towns had been built for the last several centuries: walkable blocks and streets, housing and shopping in close proximity, and accessible public spaces. In other words: New Urbanism focuses on human-scaled urban design.”

As the 2017 APHG exam has ended, some people have asked for more resources on new urbanism.  Here is information from New Urbanism (dot org) the Congress on New Urbanism for teachers and students that are reassessing the Free Response Questions.

“Rick Friday has been giving farmers a voice and a laugh every Friday for two decades through his cartoons in Farm News.
Now the long-time Iowa farm cartoonist tells KCCI that he has been fired. Friday announced Sunday that his job was over after 21 years in a Facebook post that has since gone viral.”

There are some intriguing layers connected to the politics of agribusiness in this story.  First off, the political cartoon highlights a pithy truth–that while the ‘traditional’ farmer is a lucrative position, in the global economy, there are corporations that are amassing fortunes in agribusiness.  The second connection is more telling–the newspaper company felt compelled to fire the cartoonist as for voicing this perspective as the newspaper advertisers flexed their pocketbooks to change the direction of the news being reported.

Mapping the human impact on the Great Lakes 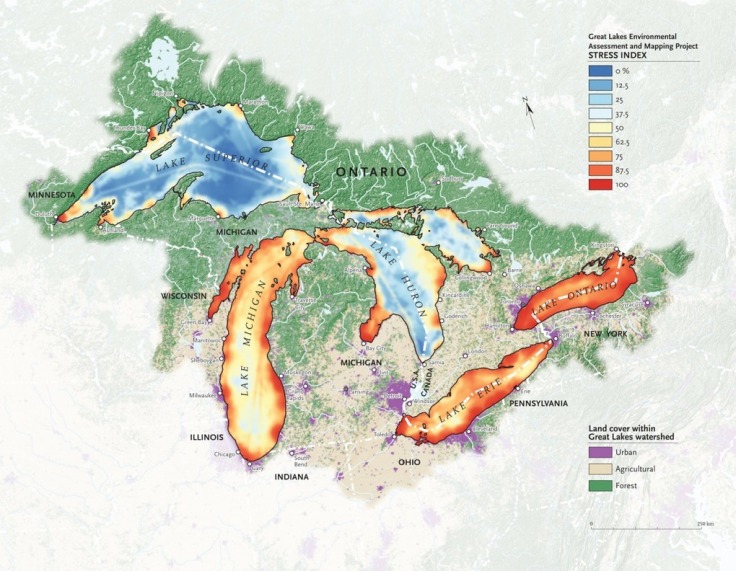 “It’s no secret that the Great Lakes are suffering tremendous ecological strain — Lake Erie was even pronounced “dead” for a time during the 1960s because of an overload of phosphorus from municipal waste. Back in 1615, though, when the entire region was pristine and explorers Samuel de Champlain and Étienne Brûlé gazed out together from Lake Huron’s shores, they dubbed it la mer douce, ‘the sweet sea.’ Today roughly one-quarter of Canada’s population and a 10th of America’s population drink from the Great Lakes basin; the beleaguered lakes alone hold more than a fifth of Earth’s freshwater.”

Questions to Ponder: What watershed do you live in?  Where does your drinking water come from?  When you flush the toilet, where does it go? How are places in your watershed linked?  How does this similar map shed more light on these issues?

How Jane Jacobs beat Robert Moses to be the ultimate placemaker

“Jane Jacobs lacked formal training in city planning but became an urban visionary who promoted dense, mixed-use neighborhoods where people interacted on the streets. She also became the nemesis of New York master builder Robert Moses. On our inaugural episode, we’ll explore Jacobs’ legacy and how the ideas and ideals of ‘St. Jane’ hold up today.”

How do you create a sense of place?  How can you make a neighborhood more vibrant and meaningful to the residents?  These are questions that central to city planners, community organizers, activists, home owners, renters, business owners, and a wide range of local stakeholders.  The Placemakers podcast has many episodes on these topics worth listening to, starting with the one about Jane Jacobs, a leading urbanist who was a proponent of “The Cheerful Hurly-Burly” of the “zoomed in” city life who fought against Robert Moses’ more sterile “zoomed out” spaces of transportation flows.  In another podcast titled “the quest for the perfect place,” the series explores new urbanism and the ideas that have shaped the movement.

Statehood, Politics, and Scale in D.C.

“Washington may be the political center of the free world, but its 670,000 residents don’t have a say in the national legislature. What they do have is a nonvoting delegate in the House of Representatives. Eleanor Holmes Norton can introduce legislation and vote in committee, but she can’t vote on the House floor. Over the course of 13 terms, the ‘Warrior on the Hill’ been fighting to change that.”

If you haven’t discovered the podcast “Placemakers” you are missing out.  In this episode, they explore the competing political context of Washington D.C. Since this podcast ran, the citizens of the district voted overwhelmingly for statehood, but since the governance of the district operates more at the national scale then on the local level, statehood is not happening anytime soon.