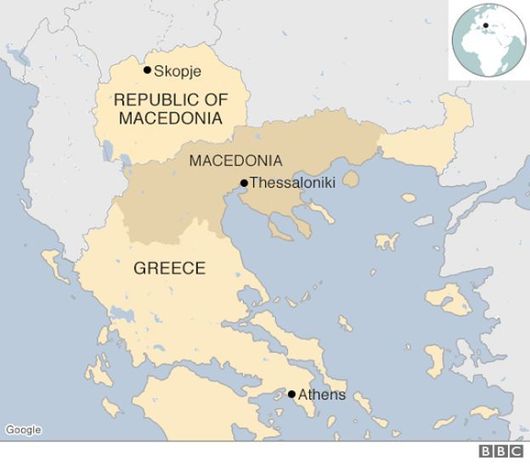 This comes after Greece backed a deal to rename its neighbour North Macedonia, ending a long row.

Oh, what’s in a name?  National pride, fear of irredentist dreams, border disputes and supranational exclusion…that’s all.  Ever since the collapse of Yugoslavia, Greece has opposed an independent neighbor using the name "Macedonia" when they have an adjacent region of the same name.  This has be a point of contention, in part, over the historic memory of Alexander the Great and Hellenic grandeur which Greece feels have been wrongfully appropriated.  It is also regarding expansionist ambitions of a "greater Macedonia" so Greece has blocked Macedonia’s entry to NATO and the EU.  To appease Greece, lessen international strife, and gain greater access to the global community Macedonia approved this change, but this move has lead to internal strife as many Macedonians feel that this name change is unfair.

“Gibraltar Bay, located near the southernmost tip of the Iberian Peninsula, is the central feature of this astronaut photograph. The famous Rock of Gibraltar that forms the northeastern border of the bay is formed of Jurassic-era seafloor sediments that solidified into limestone, a rock formed mostly of the mineral calcite, which is found in the shells of sea creatures. The limestone was subsequently lifted above the ocean surface when the African and Eurasian tectonic plates collided.”

Gibraltar is an exclave of the UK on a peninsula connected to the Spanish mainland that controls access to the Mediterranean Sea; there is naturally going to be friction over this unusual political configuration. “La Linea” marked on the image is the international border

Questions to Ponder: Why are both Spain and the UK invested in this piece of territory?  What challenges are there for a small exclave when neighbors aren’t friendly?  How does Spanish and British supranational connections impact this issue?

The United Kingdom has officially kicked off the process of ‘Brexit,’ almost nine months to the date after the country’s momentous vote to leave the European Union.

“A 7,000 km barrier is being built along the footsteps of the Sahara to stop the desert expanding. The Great Green Wall project started in 2007 in Senegal, along with 10 countries in Africa to combat the effects of climate change. Al Jazeera’s Nicolas Haque reports from Widou, deep in the Sahel.”

The Great Green Wall initiative is composed of 11 countries that are cooperating together to combat the physical and human geographic characteristics that make the Sahel one of the more vulnerable ecosystems in the world.  This swath running through Africa is the transition zone where tropical Africa meets the Sahara.  The Sahel is susceptible to drought, overgrazing, land degradation and desertification.  These issues of resource management and land use transcend international borders so this “Green Wall” was created with the intent to protect the environment, landscapes and people of the Sahel from desert encroachment (the shorter, social media friendly version of this video is available here).

Why are the Baltic states so rattled?

This week, soldiers from Germany and Belgium are settling into a new posting in Lithuania as part of the latest NATO troop deployment. Will their hosts—and the region—feel more secure as a result of their presence?

This video from the Economist shows how shifting political situations in one country can create some powerful ripples elsewhere.  It also shows how fluid geopolitical alliances can either embolden a waxing power, or create anxiety among states that might be waning in regional influence.  Supranational allegiances can weigh heavily on smaller states.

The EU is in a “critical situation”, the German chancellor says, as leaders meet to discuss ways to regain trust after the UK’s vote to leave the bloc.

Some of this article is focused on the micro-issues of the day, but the larger issues of what is the proper role for an economic supranational organization is front and center.  Should the EU have a military headquarters?  How should the member states respond to the underlying tensions in the Union?  Attached is a video showing residents of EU countries with a wide range of opinions about the organization and what it’s future should be and another video about the major topics on the table.  Given that the politicians there are balancing personal, national, and European interests, it is a sticky wicket (if British phrases are still allowed, even if they are the only member state not invited to the summit).

Turkey’s ‘bumpy ride’ into the EU?

“As the UK prepares for what looks like a slow and painful divorce from the European Union, the people of Turkey are wondering how their relationship with Europe will now develop.

The government in Ankara has been seeking to strengthen its case to join the EU, but as Europe grapples with Brexit – is the Turkey’s membership closer or further away?”

This video show some of the recent shifts in the always important, often rocky Turkey/EU relationship.   Economically, Turkey has consistently sought greater ties with Europe for the past few decades and Europe keeps Turkey at arms length.    Turkey has applied to join the EU, but that is not going to happen without some massive social restructuring that would take years.

Why the Ukraine Crisis Is the West’s Fault

Conventional wisdom in the West blames the Ukraine crisis on Russian aggression. But this account is wrong: Washington and its European allies actually share most of the responsibility, having spent decades pushing east into Russia’s natural sphere of interest.

Ukraine is culturally, economically, and geographically connected with Russia. It is a territory that Russia cannot afford to lose as a part of their sphere of influence.  John Mearsheimer, in his article Why Ukraine Crisis is the West’s Fault, gives a detailed account of NATO expansion and how it effected the Russian demand for hegemony in East Europe. Ultimately it is his conclusion that it was this expansion that provoked the Russians, and the current crisis is on the hands of the West. The will of a majority of Ukrainians is be begin economically aligning more with EU/NATO countries.  Ukraine decided against Russia, and Russia responded with force.   Here is an article where scholars weigh in and mostly disagree with the author’s provocative assessment.

Brexit: Reaction and the Aftermath

“The reactions to the Brexit have come in from all corners.  Since this was so shocking, newspapers articles that are insightful are using hyperbole in their titles to get our attention (Britain just killed globalization as we know it–Washington Post; Will Brexit mark the end of the age of globalization?–LA Times).  There have also been some excellent political cartoons and memes, so I wanted to archive a few of them here.”