Roots of the Mali Crisis

January 19, 2013—The West African nation of Mali is making headlines after a wave of French military actions on Islamic extremist groups now controlling the northern part of the country. National Geographic Senior Writer Peter Gwin has…

This 6-minute video clip is a good way to help students understand the ethnic and geopolitical context of the Mali conflict.  What impact did the superimposed borders of colonialism have in creating the conflict? 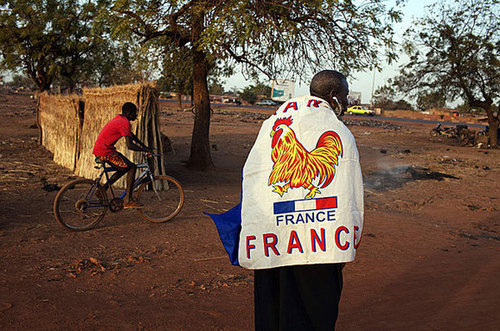 Balancing the interests of stakeholders in the Malian polity will be difficult, however some key steps should be taken.

This is a great article for give to students to provide them with the geo-political context to understand the situation in Mali.  It also give a great reminder for observers and the involved parties to not lump all Tuareg civilians in the north with the Islamists groups that are in control.  “This failure to consistently distinguish between different groups in the North by multiple stakeholders…portends longer term trouble.”  For additional reading, see this Geography in the News article on Mali, tailor-made for classroom. 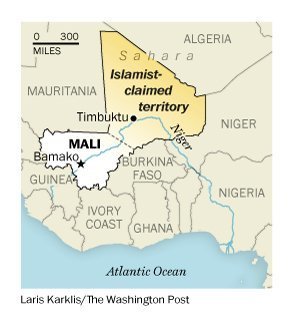 France is ready to stop Islamist militants who control northern Mali, the French president says, following a plea for help by his Malian counterpart.

In April 2012, Islamist rebels seized power in Northern Mali and have declared independence, proclaiming this region The Islamic State of Azawad.  Recently they have begun to amass armies on the southern limits of their territory and presumably are seeking to topple all of Mali.  The former colonizer, France is being called upon to assist as is the United Nations.  This area is part of a region known as the Sahel, the transition from a dry North Africa to tropical Sub-Saharan Africa, from a Muslim/Arab north to a Christian/Animist/Black region of Africa.  The human and physical geographic divisions in this region plays a major role in this conflict.