Energy prices have risen across Europe in the last year, and as winter approaches many fear that an energy crisis might be on the horizon.  This brings up many questions, with the first and most obvious one being, why did energy prices rise?  Complex global markets are, well, complex, but large geopolitical events are often the stage for trade disruptions that can lead to shortages.  The Russian invasion of Ukraine in April 2022 was a major move, one that many European countries were quick to condemn.  Russia is an energy exporter with large oil, coal and natural gas reserves.  Russia supplied 40% of the EU’s natural gas before the war, but only 9% now after the Nord Stream 2 pipeline ceased being utilized.  Nord Stream 1, which pipes gas through the Baltic to Germany, has a very limited flow currently (officially, this is annual maintenance, but skeptics note that the flow is lower than regular maintenance and suspect Russia is putting the squeeze on the EU). This summer’s heat wave wouldn’t have been as big and issue if energy were abundant and relatively cheap in Europe.

Europe has stumbled into an energy crisis because of these geopolitical maneuverings. Natural gas is a primary energy source, but one that is especially used for heating and therefore, more critical in the wintertime.  The United States and European countries sought to impose strong economic sanctions against Russia, hoping to cut into Putin’s revenue stream and stop the war; or at least not feel as though they were funding the war.  This overvalued the power of an embargo of an and underappreciated the reliance of the European economy and standard of living on access to affordable energy.

Natural gas prices in Europe were at times in the summer, 7 to 8 times more expensive than gas in the United States. Many private individuals, small businesses, and any business with a thin profit margin, felt the squeeze of energy bills. Russia isn’t backing down from any economic sanction, saying that other regions besides Europe will gladly buy Russian gas. China has kept Russian production from grinding to a halt, effectively breaking the westward embargo, by sending it East.  Consequently, Europe is facing the negative consequences of the economic sanctions more so than the Russian energy sector.

Europe has diversified natural gas and other energy sources, and launching a package of emergency proposals to get through the winter. Some analysts are optimist that Europe has solved the energy crisis before winter, by building more storage, increasing domestic production, and diversifying their supply. .  Countries like Germany have been reluctant to use their nuclear power and were caught flat-footed.    Coal, nuclear energy, and other energy sources that were dismissed for carbon emission concerns or environmental concerns are being reevaluated as the need is high in an energy-hungry market.  The prices will continue to fluctuate but this is an issue worth keeping an eye on in the next few months.

Donbas: The heart of the Russian/Ukranian war

This map can go a long way towards explaining what the Donbas region is, and why it is seen as strategically important to both Russia and Ukraine. This BBC article makes a strong argument that capturing all of the Donbas region would now be Putin’s primary objective. What “winning” this war has meant for Russia has changed; especially now given that a quick takeover of the entire country of Ukraine is impossible. I see 4 reasons why Ukraine has done better in the first month of this war than some expected: 1) the government did not collapse under pressure, 2) the Ukrainian people took up the cause with patriotic fervor, 3) the Russian military was not the power that many expected, and 4) the international sanctions were more impactful in an integrated, global 21st century economy than they would have been just 50 years ago. At the start of the war Russia had (IMHO) much grander ambitions on what would have constituted a victory, but now, control of the entire Donbas region is still the prize that they’ve coveted and would represent an new idea victory. SOURCE: BBC

10 countries that desperately want people to have more sex

Roughly half the countries around the world experience low fertility rates, and some get pretty creative in how they encourage procreation.

While many countries have anti-natalist policies (policies to discourage more births), other countries with declining populations have pro-natalist policies in an attempt to increase fertility rates.  While not an exhaustive list, this list gives a few more examples that teachers can use to show how countries in stage 4 of the demographic transition are dealing with declining fertility rates.

Why are the Baltic states so rattled?

This week, soldiers from Germany and Belgium are settling into a new posting in Lithuania as part of the latest NATO troop deployment. Will their hosts—and the region—feel more secure as a result of their presence?

This video from the Economist shows how shifting political situations in one country can create some powerful ripples elsewhere.  It also shows how fluid geopolitical alliances can either embolden a waxing power, or create anxiety among states that might be waning in regional influence.  Supranational allegiances can weigh heavily on smaller states.

The fate of religious freedom in the former USSR, 25 years after its collapse

It’s been 25 years since the fall of the Soviet Union. How has religious freedom fared in this part of the world?

The collapse of the former Soviet Union was one of the biggest political events of the 20th century with long-reaching cultural ramifications.  The generations of state-sponsored atheism followed by a variety of new political policies has meant that religious freedoms vary greatly in the regions that were once a part of the USSR.  This article gives a good breakdown of all the former SSR’s and the state of religious freedom today in each of them.

Why the Ukraine Crisis Is the West’s Fault

Conventional wisdom in the West blames the Ukraine crisis on Russian aggression. But this account is wrong: Washington and its European allies actually share most of the responsibility, having spent decades pushing east into Russia’s natural sphere of interest.

Ukraine is culturally, economically, and geographically connected with Russia. It is a territory that Russia cannot afford to lose as a part of their sphere of influence.  John Mearsheimer, in his article Why Ukraine Crisis is the West’s Fault, gives a detailed account of NATO expansion and how it effected the Russian demand for hegemony in East Europe. Ultimately it is his conclusion that it was this expansion that provoked the Russians, and the current crisis is on the hands of the West. The will of a majority of Ukrainians is be begin economically aligning more with EU/NATO countries.  Ukraine decided against Russia, and Russia responded with force.   Here is an article where scholars weigh in and mostly disagree with the author’s provocative assessment.

Why Ukraine needs Russia more than ever

As the country risks becoming a failed state, Kiev must recognise that economic survival depends on Moscow not the west

This is a politically inflammatory title for an op-ed article, given the recent Russia’s seizure of the Crimean Peninsula from Ukraine.  Regions and economic regional linkages form and continually reform.  Our most likely business partners aren’t necessarily our best friends. 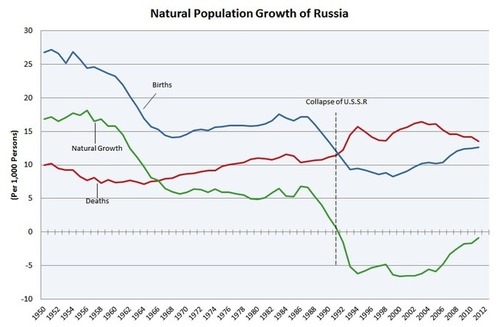 The economic and social turmoil after the fall of the Soviet Union was profound enough to be seen in the demographic statistics.  Birth rates dropped as the death rates went up.  Typically when birth rates drop it is presented as an indicator of social development, but it clearly is not in this instance.  What explains these statistics?
Via en.wikipedia.org