The Real Irish-American Story Not Taught in Schools

“The crop failure in Ireland affected only the potato—during the worst famine years, other food production was robust. Michael Pollan notes in The Botany of Desire, ‘Ireland’s was surely the biggest experiment in monoculture ever attempted and surely the most convincing proof of its folly.’ But if only this one variety of potato, the Lumper, failed, and other crops thrived, why did people starve?  Thomas Gallagher points out in Paddy’s Lament, that during the first winter of famine, 1846-47, as perhaps 400,000 Irish peasants starved, landlords exported 17 million pounds sterling worth of grain, cattle, pigs, flour, eggs, and poultry—food that could have prevented those deaths. Throughout the famine, as Gallagher notes, there was an abundance of food produced in Ireland, yet the landlords exported it to markets abroad.”

I teach my students that famines reflect a lack of power (political and economic) more so than they are indicative of an absence of food in that region.  The Irish potato famine exemplifies the three main causes of food insecurity:

2. Destruction of capacity to grow food

3. neglect of the starving

“Star Wars Epiosde VII was filmed on Skellig Michael island in Ireland. What better place to depict an ancient, mystical, martial asceticism in a galaxy far, far away than an actual ancient eremitic settlement, dripping with stone-cold monastic austerity, located at what was for centuries the very ends of the earth, seven miles off the very tip of a western Irish peninsula?”

This island is dripping with geologic, biogeographical, and religious intrigue that makes this world heritage site a place that is shrouded in mystery.  This article from JSTOR Daily is a great introduction to the island for the incurably curious.  The already vibrant tourism industry is bound to increase after Star Wars used this incredible location in the recent film (much like New Zealand experienced a huge spike in tourism after the Lord the Rings films).  Filmmakers understand the power of place to deepen the narrative; they frequently situate their stories in a geographic context that will heighten the emotional impact of the story.  For more on the dramatic locations of Star Wars filming sites, see this article by National Geographic.

“Belfast has been coming into its own in the last few years, developing a vibrant restaurant scene, award-winning architecture and a new cosmopolitanism.”

A Barrier to Peace 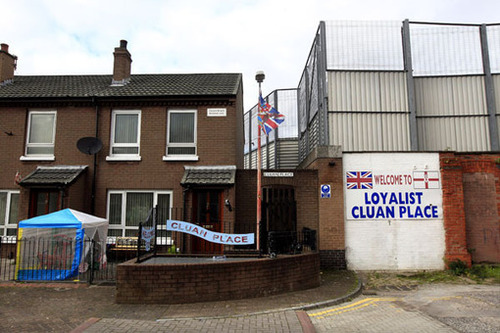 “Why would they want to pull down these walls?” asks William Boyd mildly as he offers me a cup of tea in his home at Cluan Place, a predominantly Loyalist area of east Belfast.

These walls, orginally installed in the late 60s to protect Belfast residents during “the Troubles.”  Today, some argue that these walls are now barriers to the peace process as they continue defacto segregation.  Walls, as barriers to diffusion, stifle communication, cooperation and interaction.  Still, these walls are symbols of communal identity and icons in the cultural landscape.  For more academic work on this, see Peter Shirlow’s Belfast: Segregation, Violence and the City.

Questions to Consider: How would a wall through an already culturally and politically divided city impact both sides of the wall?  Today, are the walls beneficial to peace in Northern Ireland?