How to Recapture the Muslim World’s Lost Hope

“What happened to us? The question haunts us in the Arab and Muslim world. We repeat it like a mantra. You will hear it from Iran to Syria, from Saudi Arabia to Pakistan, and in my own country, Lebanon. For us, the past is a different country, one not mired in the horrors of sectarian killings. It is a more vibrant place, without the crushing intolerance of religious zealots and seemingly endless, amorphous wars. Though the past had coups and wars too, they were contained in time and space, and the future still held much promise. What happened to us? The question may not occur to those too young to remember a different world, whose parents did not tell them of a youth spent reciting poetry in Peshawar, debating Marxism in the bars of Beirut, or riding bicycles on the banks of the Tigris in Baghdad. The question may surprise those in the West who assume that the extremism and bloodletting of today have always been the norm.” SOURCE: The Atlantic

This opinion piece is a somewhat controversial, but that is part of its value.  The core of the author’s thesis is that to understand the modern Middle East, especially if one is searching for a way to create a more democratic Middle East, we must look to the past to see how we got there.  1979 is seen here as the pivotal year that changed the trajectory of the Middle East, in large part because of the Islamic Revolution in Iran, but for many other region-wide changes.  A nice pairing would be to also read this discussion from the NY Times about the rise of MBS as the key prince in Saudi Arabia, looking to reform society and reform movements in Saudi Arabia while crushing his opponents.  Both are articles are book excerpts.

Questions to Ponder: What were the big shifts that occurred in 1979?  What are things that you think that the author gets correct about their historical analysis of the Middle East? What are some positions where you disagree with the author?

“The 334 sq km (129 sq mile) attraction – about the same as Las Vegas – will offer cultural, sporting and entertainment activities – including a Six Flags park and a safari park. The announcement boasts it will be the first of its kind in the world. Building will begin early next year and the first stage finished by 2022.

It forms part of a wider master plan. Vision 2030, announced by Deputy Crown Prince Mohammad Bin Salman a year ago, aims to diversify the economy and reduce the kingdom’s reliance on oil, through a series of projects.”

This brings up so many more questions than answers.  Is this geared to attract tourists from Saudi Arabia, the region, or possibly even international tourism?  Will the entertainment amenities be gender segregated as most public places in Saudi Arabia are?  Is the idea of an entertainment city in one part of the country going to be culturally compatible with a holy city on the other?

Fields of Green Spring up in Saudi Arabia

Saudi Arabia is drilling for a resource possibly more precious than oil by tapping hidden reserves of water in the Syrian Desert.

In northern Saudi Arabia, near Jordan, oil resources are sparse and so is surface water.  Water might just be the more important liquid natural resource, especially for sustaining a population.  There are underground water reserves that are stored in aquifers, layers of rock that hold water.  The water that collects in aquifers may take many years to replenish so this practice is sometimes referred to as water mining.

Question to ponder: If Saudi Arabia is rich enough to buy their own food and they are at a competitive disadvantage for food production, why would they invest so much money on farming marginal lands? 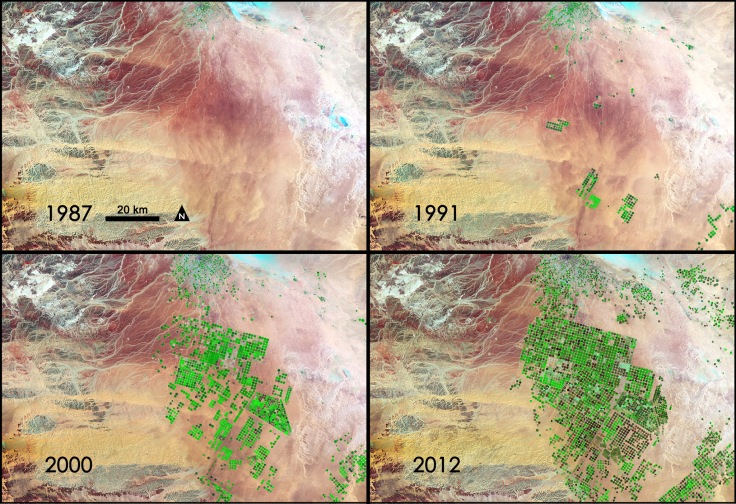