Let’s first dispel some mistaken ideas about Taco Bell (Malcolm Gladwell’s excellent podcast, Revisionist History discussed Taco Bell extensively in an episode that was primarily about the concept of cultural appropriation in music and food).

Myth #1: The Bell represents the Spanish Mission of the Southwest.  Fact: Glen Bell is the founder so the family name is the rationale for the iconic bell.

Myth #2: Taco Bell makes bad, cheap Mexican food.  Taco Bell’s goal is not trying to make Mexican food, but to make an interpretation of Mexican food for a broader audience with a different palate. They search for the familiar in the unfamiliar and make it all seem new.

One of these “interpretations” of Mexican food is the Mexican Pizza (not a thing in Mexico).  While the name doesn’t sound American, the creation of this is a distinctly American concoction. The cultural creation of this on the surface seems like a simple mash-up, but the cultural dynamics are a little more interesting than that.  Yes, the fusion is of two familiar ideas, but the reaction to and how cultural innovations are received is culturally mediated.  This may seem surprising, but South Asian immigrants to the United States especially love Mexican Pizza (NPR article) because it 1) it has a combination of flavors and spices that is reminiscent of South Asian traditional foods, 2) it can be made to be vegetarian which aligns with the religious customs of Hinduism, and 3)  eating fast food with a friends of all backgrounds feels like an All-American activity for young immigrants and children of immigrants.

The cultural reception of the Mexican Pizza shocked Taco Bell executives since the planned for it to be a seasonal part of the menu, like the McRib is for McDonalds’.  Sure, it was partly supply chain issues, but they drastically underestimated that this particular menu item would culturally resonate beyond their normal consumer base as demonstrated by this tweet below:

“Cheese from all around the world comes in different forms, textures, and colors, from white to blue. It’s eaten in many different ways, and some cheeses have legends or myths behind their invention Let’s take a look at what cheese looks like around the world.”

“While there are few symbols as quintessentially French as the baguette, its status – and quality – have been uncertain in recent years. Beginning in the 1950s, bakers began looking for shortcuts to make baguettes more quickly: relying on frozen, pre-made dough. ‘Those bakers at that time were happy,’ said Bouattour, as he led me past the fresh loaves at his Arlette & Colette in Paris’ 17th arrondissement. ‘But it killed our profession.’ In an attempt to save traditional French baguettes from widespread industrialisation, France passed Le Décret Pain (‘The Bread Decree’) in 1993, establishing that, by law, an authentic baguette de tradition must be made by hand, sold in the same place it’s baked and only made with water, wheat flour, yeast and salt.”  Source: BBC

Technological advancements and economic practices would have altered French baking practices, but to halt the change cultural purists took political steps to preserve the old cultural traditions.  The running of bakeries, and the winners of the prize for the best Parisian baguette have been bakers who come from immigrant families. Bakers with Middle Eastern, North African, and West African backgrounds are now key participants of shaping the most French of cultural goods.

Healthy Nation Rankings: These Are the Healthiest Countries

"Maybe it’s something in the gazpacho or paella, as Spain just surpassed Italy to become the world’s healthiest country."

This data offers excellent insight into regional developmental patterns around the world–it is very much worth exploring.  However I’m sharing this also for it’s mapping project potential; the data behind this map is available in the article and students can make their own maps with it. 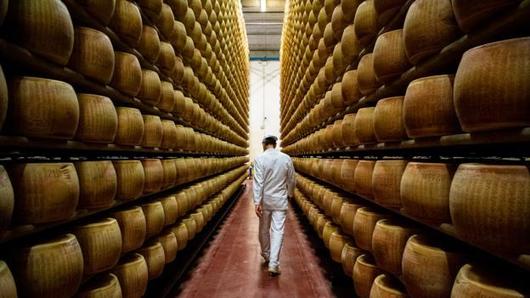 "Pound for pound, Parmigiano-Reggiano can compete with almost any food for calcium, amino acids, protein and vitamin A – and is prescribed by doctors to cure ailments."

While this article focuses often on the nutritional aspects of Parmigiano-Reggiano, I want people to notice the understated importance of place and the cultural ethos surrounding the production of this product. True, it is an economic industry for the region, but it is also a defining cultural characteristic of the place and a way of life. The place makes the product and the product makes the place.

Sky-high food prices in the North have led many residents of Iqaluit to turn to Amazon Prime to save on necessities. But is that a sustainable solution?

Nunavut is remote…far more remote than most of our students can imagine.  They live over 1,000 miles from any city with half a million people.  The entire territory is enormous, but sparsely populated with only 36,000 people.  Try to image getting commercial goods to such a remote location.  The Canadian government has invested heavily to subsidize systems to get food products and other necessities to Nunavut.  Still, the transportation costs are so high, and the numbers are so few that economies of scale can’t help this situation.

Enter Amazon Prime in 2005, and the online retail giant began offering free shipping for “Prime” customers for a flat yearly subscription fee (today $99 in the U.S.).  This was simply too good to be true for many customers in far-flung settlements in Nunavut.  Amazon, probably not anticipating the overwhelming transportation costs associated with a place like Nunavut, in 2015 stopped offering Prime membership for Nunavut customers that do not live in the capital city of Iqaluit.  Still, the capital city looks to Amazon Prime more so than the Canadian or territorial government as their lifeline to the global economy.  Some even argue that Amazon Prime has done more to improve the standard of living  and providing food security for Nunavut residents than the government.

Here’s What Your Part Of America Eats On Thanksgiving

"Every region enjoys pumpkin pie. But beyond that, there are three Americas: The America that disproportionately has apple pie (New England and the Middle Atlantic), the America that has pecan pie and sweet potato pie (the assorted South), and the America that consumes cherry pie (the Midwest and West)."

The Root Causes of Food Insecurity

Why are some communities more vulnerable to hunger and famine? There are many reasons, which together add up to food insecurity, the world’s no.1 health risk.

This video is an excellent summary of the geographic factors that lead to food insecurity and hunger and the main ways NGO’s are trying to combat the issues. This is an incredibly complex problem that, at it’s heart, is a geographic issue that can challenge student to synthesize information and make the connections between topics.

"The vast majority of fishing vessels follow the rules governing fishing – but many are not, and these bad actors can cause a lot of damage. Vessels may take too many fish ­– overfishing – which is causing our fisheries to collapse. Then there is the problem of illegal fishing, which can occur in protected areas, in another country’s waters or on the high seas. This threatens jobs and food security for millions of people, all around the world.

The trouble is, so much of this illegal activity is hidden – it happens out to sea, making it difficult to scrutinize what individual vessels are getting up to. Fortunately, we are now beginning to see what happens after commercial fishing vessels leave port.

The interactive map we created allows anyone in the world with an internet connection to see the activities of the commercial fishing fleet globally."