For centuries, South Asia has had its own Khawaja Sira or third gender culture. Now, some third gender people in Pakistan say the modern transgender identity is threatening their ancient culture.

Sometimes our assumptions about a society, and how they might react to cultural issues are just that…assumptions.  I for one was very surprised to learn that Pakistan had a a traditional third gender.

China plans to inject some $46bn – almost three times the entire foreign direct investment Pakistan has received since 2008. Many say Mr Sharif’s penchant for “thinking big” and China’s increasing need to control maritime trade routes may well combine to pull off an economic miracle in Pakistan.

But there are questions over Pakistan’s ability to absorb this investment given its chronic problems with militancy, separatism, political volatility and official corruption.

China is worried about violence from ethnic Uighurs in its mostly Muslim north-western Xinjiang region and fears hard-line separatists could team up with Uighur militants fighting alongside members of Pakistan’s Taliban.

Fascinating footage of a traditional ceremony that takes place on the Pakistan India border. From the BBC

This is a fascinating political display that shows a degree of cooperation, but is made into a sports-like event because of the geopolitical tension/passion between these two South Asian neighbors.  They have ‘toned down‘ the overtly display of hostility in recent years.  Some love this border ceremony and others fear that they are playing with fire, fanning the flames of nationalism that only exacerbates the tension.  Just last year, this border checkpoint was the site of a terrorist attack that killed 50.  Click here for more information about the border tension in the Pakistan/India/China borderland.

“It’s rare that a video from a brand will spark any real emotion–but a new spot from Google India is so powerful, and so honest to the product, that it’s a testament not only to the deft touch of the ad team that put it together, but to the strength of Google’s current offering.”–Forbes

True, this is a commercial–but what a great commercial to show that the history of of a geopolitical conflict has many casualties including friendships across lines.  This isn’t the only commercial in India that is raising eyebrows.  This one from a jewelry company is proudly showing a divorced woman remarrying–something unthinkable for Indian TV one generation ago.

The limits of freedom for educated girls in Malala’s Pakistan

In a country this battered, fractured, dysfunctional – how much can she really hope to achieve?

The issue of female education in Pakistan has exploded after Malala Yousafzai was attacked by the Taliban for publicly advocating for girls to receive more schooling.  This attack has lead several media outlets to take a more serious look at the gendered cultural and economic opportunities (or lack thereof) for girls within Pakistan.  This NPR podcast also speaks of the real options in front of so many girls like Malala and the cultural and political contexts within which they navigate their lives.

History of the India-Pakistan Border 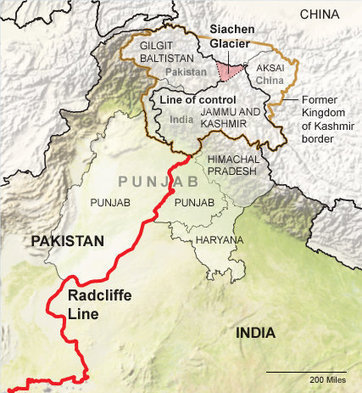 The weird, violent history of the Indo-Pakistani border.

Geography rarely makes sense without the added lens of history.  This fantastic article chonicles the history of the geopolitical conflict between India and Pakistan, centering on the disputed Kashmir region.  This border is tied into colonial, cultural, political and religious layers of identity.  As one of the great unresolved issues of the colonial era, this standoff may loom large as India becomes increasingly significant on the global scale.