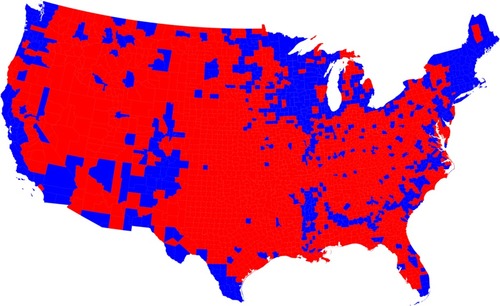 Rick Santorum, by taking on “blue” big cities, is also criticizing the Republicans, his own party.

The 2012 election are showing again some of the cultural, political and economic divides that exist in the United States.  This above map portrays the 2008 presidential election, with counties that voted for McCain in red and Obama in blue.  Rick Santorum has said, in reference the political map of the United States today, “Think about it, look at the map of the United States…it’s almost all red except around the big cities.”  Santorum has dismissed GOP candidates successes as less meaningful because these victories took place in major cities.  This political portray is an attempt to accentuate the difference between rural and urban America to hit his key demographic, but it also begs for further analysis into the electoral geography of the United States.  The next map is a cartogram that shows the same counties, but weights the size of the county by population instead of territory.

As social media critic Jesse Lasler has retorted, “It’s all blue except where nobody lives.”  Each perspective biases one region, as more quintessentially American, than the other.  Do you see Urban America as mainstream America, or Rural America as the Heartland and the soul of what it means to be an American?  What accounts for the sharp political differences between these two core components of the United States?  For more maps, see this collection of 2008 election maps that shed light on the spatial voting patterns.

This graphic, via Andy Baker, highlights these demographic patterns.  However, it shows that while ‘swing states’ will be the key talking points as the election gets closer, the more important ‘swing’ region in the polarized rural/urban dichotomy, will probably be the suburbs as stated in this political geography blog.