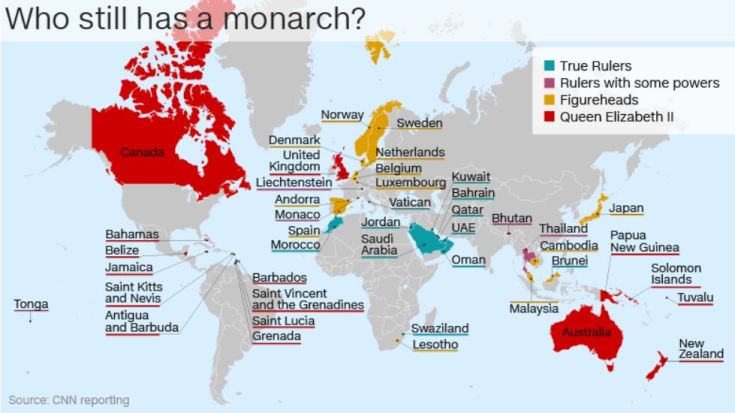 “In a rare televised speech, Japan’s Emperor Akihito has addressed his people directly about his declining health. A Japanese monarch has not stepped down in about 200 years.

Once revered as a living God, the Japanese emperor became a ceremonial figure in Japan’s constitutional monarchy after World War II. Occupying forces seized much of the imperial family’s wealth and today Parliament controls the household’s annual budget and allowances, which total well over $100 million.”

It’s amazing to think that this is only the 3rd public message from an Emperor since the invention of TV and the radio.  (1-Surrender to end WWII, 1945. 2-Fukushima nuclear disaster, 2011, 3-Emperor’s Declining health, 2016).  This news though, brings up the questions of how many monarchs still rule today, and with what amount of power do they actually have?  The map accompanying this gives the quick run-down.