Belize: A Spanish Accent in an English-Speaking Country 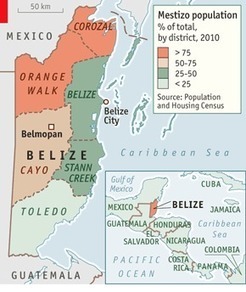 "BELIZE has long been a country of immigrants. British timber-cutters imported African slaves in the 18th century, and in the 1840s Mexican Mayans fled a civil war."

This is an older article (2012), but the pattern mentioned here is all the more relevant.  Belize has a much higher Human Development Index ranking that its Central American neighbors such as Guatemala.  That fact alone makes Belize a likely destination for migrants.  Given that Belize was ‘British Honduras’ during colonial times, English is (still) the official language, but that is changing as increasingly Spanish-speaking immigrants are changing the cultural profile of Belize.