Ever since I researched the meanings of monuments in the cultural landscape in Mexico City, I’ve been fascinated by the cultural politics of memory and heritage. The removal of a statue is a cultural 180, acknowledging what was once honored and revered is now something that does not worthy of that distinction. This sort of change is not without protests on both sides and a cultural rearticulation of who “we” are when “we” make a public memorial.

As a graduate student I wrote my dissertation on the meanings within the symbolic landscape.  Since very few are clamoring to read my 500-page dissertation, this is a sampling that shows one of my major points: changes in the symbolic landscapes are indicators that there are shifts in how individuals and communities are interpreting their identity and understanding their history.  Here are 2 examples from that Mexico City research, as well as a few others with a variety of cultural contexts.

Cecil Rhodes was the namesake for the Rhodes scholarship at Oxford University and the colonial names of Zambia (Northern Rhodesia) and Zimbabwe (Southern Rhodesia). He was deeply connected to British colonialism and was one of the most ambitious colonizers that expanded the British Empire. This week a statue of Cecil Rhodes on the University of Cape Town campus was removed. See the BBC article, Yahoo News!, and PRI podcast for more details.

In March 2010 edition of the Journal of Geography, I wrote an article entitled, Mexico City’s Indios Verdes: Exploring Cultural Patterns Using Public Memorials.  In this article I used statues in Mexico City to show how public space plays a critical role in the historical narratives of a nation that are used to form cultural identity.  The patterns and processes of cultural change are tangible in instance, making it a useful teaching example.

In an article published in 2009 in Historical Geography, I wrote about another shifting statue in Mexico City.  This article is entitled Mobile Monumental Landscapes: Shifting Cultural Identities in Mexico City’s “El Caballito.”   This article furthers the idea that changes in the cultural landscape reflect and represent cultural changes within the society.

I didn’t dream that the “historical narrative” of this memorial would ever be complex or a contentious issue.  After the release of the Freeh report with incriminating evidence that Joe Paterno actively concealed the truth in regard to the Jerry Sandusky sexual abuse scandal, I wrote what I felt should happen to this monument in a brief op-ed.  Not necessarily forever, but for the here and now. 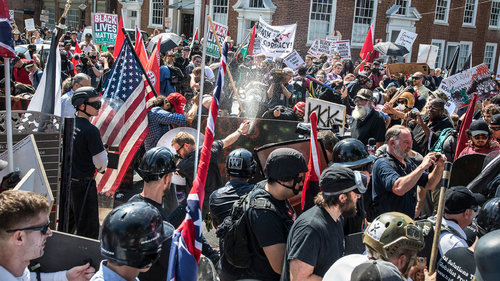 The protests in Charlottesville, VA in August 2017 were all about Confederate statues, and they were never about monuments all at the same time.  This video from HBO’s Vice news has some f-bombs, but frankly, that isn’t the most disturbing content of this unflinching look into the Alt-Right/White nationalist protests and the subsequent counter-protests.  Despite the graphic display of violence, overt racism, and coarse language, I find the video incredibly illuminating and insightful.  It is hard to sanitize and sugar-coat the facts and still give an accurate portrayal of these events.

As I said, it’s about the statues, but not truly.  At stake is the control over public space and the normative messages within the cultural landscape.  Who decides what history gets etched into our public squares?  Who’s heritage?  What are the meanings within this landscape?  Even 20 years ago, the thought of marshaling political power in Southern cities and states to remove Confederate statues was unthinkable what these symbols meant is different then what they were mean today.  Modern southern politicians are seeing that supporting them vigorously is the new lost cause. Could we have a cultural landscape that has no public memorials to the Confederacy in 25 years?  The call for the removal of all Confederate monuments is in full swing.  What would that say about the society that restructured the landscape?  The cultural landscape isn’t just a reflection of society; it also shows political, ethnic, cultural and economic struggles to as “who we are” and what our communal values are continually get remade.

The symbols of the Confederacy have long been venerated by some as symbols of southern heritage, but implicitly a white heritage.  Today, many are seeking to create public spaces that foster an sense of inclusion of African Americans into that definition of “who we are” in the public places.  In May 2017, New Orleans removed some of their Confederate statues, and Mayor Mitch Landrieu gave a powerful speech that contextualizes (one perspective on the) historical meanings embedded in these statues.  I find his perspective to be the most appropriate for a South that respects all of its citizens and honors its past.

FURTHER READING:  Geographer Jonathan Leib gives a fantastic analysis of the competing politics of the juxtaposition of Confederate statues and Arthur Ashe in Richmond, VA.  Some geographers (Derek Alderman and Joshua Inwood) in an op-ed argue that this is the time for the Trump administration to explicitly repudiate white nationalism.