Many teachers use Billy Joel’s classic song and music video Allentown as a teaching tool to introduce the topic of deindustrialization in the Rust Belt of the United States.  This alternative music video version adds some useful teaching images to help students contextualize the lyrics.

Another song to consider using is Telegraph Road by Dire Straits; the song follows a town as it industrialized and as it later deindustrialized.

Outside the Amtrak Window, a Picture of the U.S. Economy

The death and life of the industrial corridor linking New York and Washington.

This article is a great example of analyzing the landscape to observe changes in any given place.  This corridor is home to 8 of the 10 wealthiest counties; at the same time this transportation corridor is also home a half a dozen of the country’s most broken cities.  Exploring this area is way to analyze the changing economic geographies of the United States.  For a visual representation of these same themes, see this 5 minute video that corresponds to this NY Times magazine article. 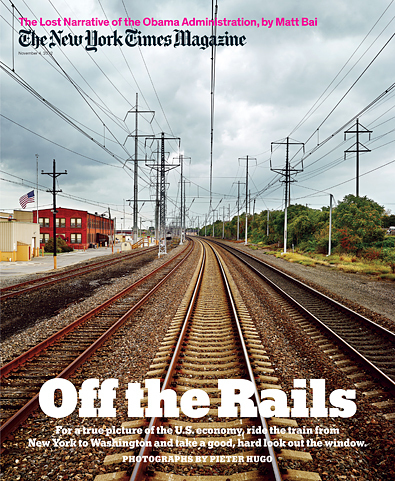 If you are a fan of the 40 hour work week, 8 hour work day, health benefits, child labor laws and this lovely thing called “the weekend,” you have the labor movement to thank.  The Department of Labor has put together a page entitled ‘The History of Labor Day.’  This helps us understand that the benefits that we enjoy today are the legacy of generations of workers who courageously fought for for workers rights.

The End of Cheap China

TRAVEL by ferry from Hong Kong to Shenzhen, in one of the regions that makes China the workshop of the world, and an enormous billboard greets you: “Time is Money, Efficiency is Life.”

China’s economic growth has been explosive. Many people predicting the economic future have used current growth percentages and trajectories to extrapolate into the future. The question that we should ask is: how long can China continue to grow at this current pace? Many signs are pointing to the difficulty that China will have in sustaining these levels of growth. The era of China being the world’s go-to source for cheap manufacturing is dependent on current geographic variables, variables that the economic growth is altering. 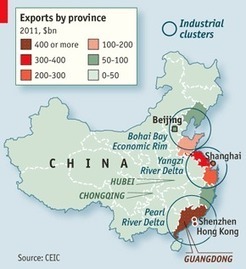 Manufacturing prices are rising, especially in the coastal provinces where factories have usually been agglomerated (also known as Special Economic Zones –SEZs). The more success that China has in manufacturing, land prices will go up, environmental and safety standards will increase. Collectively, this will mean that labor costs for the factories will also be increasing as Chinese workers are not only producing but also becoming consumers of manufactured goods with an increased standard of living. This is changing the spatial patterns of employment in China and will impact Chinese manufacturing’s global influence. Sarah Bednarz recommends this article as “a needed update on the new international division of labor (NIDL).”  For more on the topic, see Shaun Rein‘s book, “The End of Cheap China: Economic and Cultural Trends that will Disrupt the World.”

The Political Geography of Gasoline Prices

Rising gas prices make people unhappy, but the pain is felt most acutely in states where it is unlikely to make an electoral difference.

There are numerous geographic themes that make this article a worthwhile read.  The evidence suggests that states the vote more solidly Republican are being hit hardest at the pump.  Gasoline expenditures as a share of personal income are higher in pro-Republican states than pro-Democrat states.  Understanding the demographic base of each party as well as population density explains much of this issue: states that are very rural drive greater distances with less public transit option, spending more per capita on gasoline.  Also, since the most affluent urban centers are Democrat-leaning, they spend a less sizeable portion of their income on gasoline.  This article would be a nice resource for a classroom/small group discussion.

This video (like the book of the same title) explores the course of human history to find the geographic factors that can help to explain the global inequalities between societies. Jared Diamond’s answer lies in the military strength (guns), superior pathogens (germs) and industrial production (steel) that agricultural societies were able to develop as the critical advantages over hunter/gatherer societies. The raw materials at the disposal of the societies inhabiting particular environments partially explain the economic possibilities before them.

Diamond hypothesizes that the orientations of the continents play a critical role in the relative advantages among agricultural societies (East-West orientations allow for greater diffusion of agricultural technologies than North-South orientations since the growing seasons and ecology are more compatible), giving Eurasia an advantage over Africa and the Americas. The Fertile Crescent had native plant and animal species ideal for domestication, which then diffused to Europe. Societies that have more developed animal husbandry develop a resistance to more powerful germs. Consequently, when two societies come in contact those with the best resistance to the worse diseases are more successful. Similarly, industrial production depends on an agricultural surplus since specialization requires that some workers not needing to produce their own food to work on technological innovations. Societies that had agricultural advantages were able to invest in technologies (primarily steel) that would enhance their advantages over other societies, as seen during colonization. Societies that had the best environments had access to large plant eating mammals suitable for domestication and the most productive grains would be poised to produce more dangerous guns, germs and steel—the key resources for economic dominion resulting in global inequalities.

Diamond’s critics argue that the ‘geography hypothesis’ is environmental determinism that does not properly value human choices into the equation. Still, the core of this book is the search for connections between the themes of Geography with a spatial framework and the video is available via Netflix, public libraries and many other outlets.

No, a nation’s geography is not its destiny 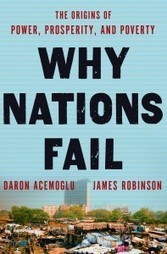 One of the most widely accepted alternative theories of world inequality is the geography hypothesis, which claims that the great divide between rich and poor countries is created by geographical differences.

This article is an excerpt of the forthcoming book “Why Nations Fail” that should serve as an ideological counterweight to the book “Guns, Germs and Steel.”  The authors argue that the wealth of a country is most closely correlated with the degree to which the average person shares in the overall growth of its economy, meaning that political institutions are more relevant to economic success and development than physical geographic resources.

For more on this upcoming book and it’s hypothesis see this New York Times review. 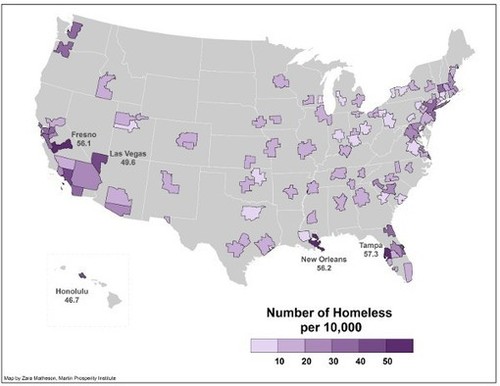 “An estimated 600,000 Americans are homeless, but the spread isn’t uniform. Some cities have been hit harder than others.” 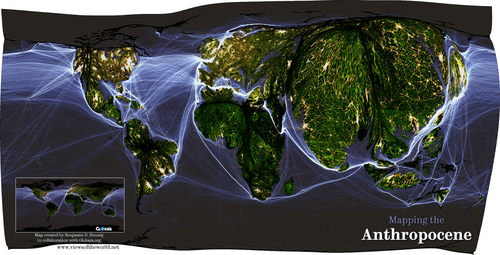 As follow-up to an earlier post about how we have enter the age of the Anthropocene, this stunning map is a fantastic visual representation of the forces that merit the dawning of a new geologic age.  This map depicts the lights at night, major roads, railways power lines, oversea cables, airline routes and shipping lanes.  It also expands the areas according to population size.  For more on the production of this map, see the Globaia website.

Spotted on Living Geography.  Via www.viewsoftheworld.net