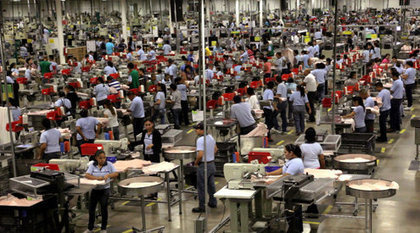 “Some four decades after welcoming foreign assembly plants and factories, known as maquiladoras, Mexico has seen only a trickle of its industrial and factory workers join the ranks of those who even slightly resemble a middle class.”

Despite making such consumer goods like BlackBerry smartphones, plasma TVs, appliances and cars that most people in the US, for instance, consider necessities, Mexican workers in these factories seldom get to enjoy these items because, as this article argues, the labor system keeps them in poverty.  Foreign investment in these businesses keep unions out and attracts workers from poorer areas, allowing low-cost labor to prevail.  Less than $8 a day is the going wage – great for the bottom line and consumer prices but very bleak for those who toil in this system.