Korea and the Yellow Sea 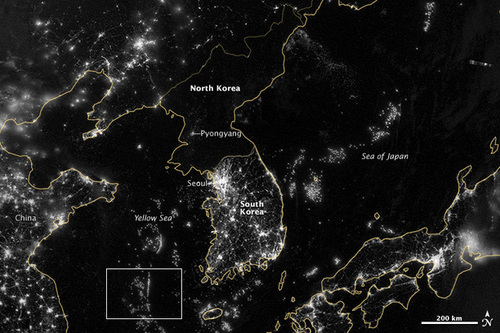 While city lights at night serve as a good proxy for population density, North Korea provides a dark exception.

This image is appears to be a regional inset of the classic Earth at Night composite image however this nighttime remote sensing image was taken from Sept. 2012.  The Earth at Night image is typically used in classrooms to discuss what this actually means for human geography (Population density?  Development? Consumption? Where? How come?).  However, this particular portion of the global image focused on the Korean Peninsula highlights two other specific issues: