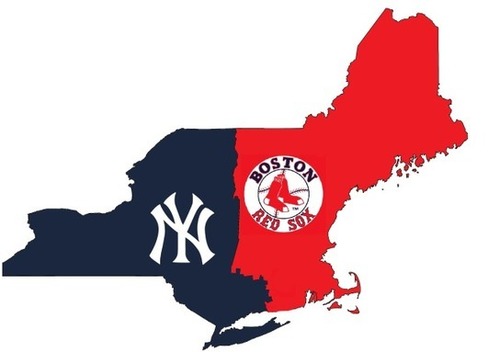 “By using Facebook data from the 2.5 million people in New York or New England that ‘like’ either the Red Sox or Yankees I was able to create a more accurate rivalry map than ever before.”

Sports maps with team logos on them are often hand-drawn works of art without much data to back them up–not so with this map.  Read the article to find the actual data which is much messier than these bold color proclaim.  These regions aren’t homogenous (are they ever?) but this is the best fit line between the major groups of fans.  The Vermont-New York State border is a fairly crisp dividing line and demonstrated by the data.

As the cartographer Ben Blatt states, “Drawing a border through Connecticut using the map above and the data was not easy. I decided that a border should be contiguous. This made it impossible to group all the Sox-leaning towns on one side and all Yankee-leaning towns in the other. The border I came up with is below. There are several other borders that could have been drawn that would have been similarly accurate. My border tried to maximize the number of towns with more than 50% Sox fans on the Red Sox side and the number of towns with more than 50% Yankee fans on the Yankee side.”

This is quite different for this map which is explained in this New York Times article.