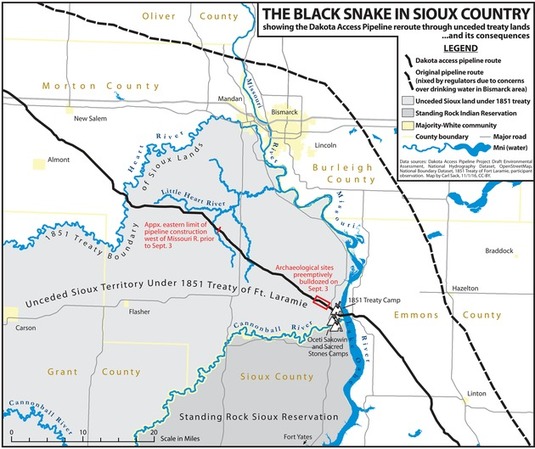 “Thousands of Native Americans and their allies have gathered on unceded Sioux land delimited by the 1851 Treaty of Fort Laramie to try and stand in the way of the “black snake” that could poison the Standing Rock Reservation’s water supply. Many have noted that the pipeline corridor was repositioned from its original route north of Bismarck after white citizens spoke up against the threat a spill would pose to their drinking water ― a threat duly recognized by the U.S. Army Corps of Engineers. Yet the Corps failed its federal mandate for meaningful consultation with the Standing Rock Tribe before signing off on a route that moved the pipeline to their doorstep.”

Maps can tell truths, and maps can be used to obscure other truths. Creating a map, choosing what data to include (and exclude) is an inherently political act.  Maps have the power to convey geographic perspectives that might otherwise be muted.