The Spread of AIDS 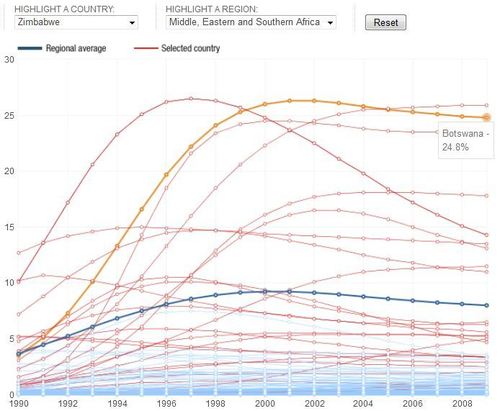 A handful of AIDS cases were first recognized in the U.S. at the beginning of the 1980s. By 1990, there was a pandemic. In 1997, more than 3 million people became newly infected with HIV.

The spread of AIDS/HIV since the 1980s has varied greatly over time and space.  The red lines represent Sub-Saharan countries and the dark blue line on this interactive is the regional average of Sub-Saharan African countries.  The regional trend was on the rise at the end of the 20th century, but is now on a slight decline (but still an major impact on the continent).  Countries such as Botswana and Zimbabwe have made some significant strides in limiting the spread of AIDS (Zimbabwe is the country that ‘peaked’ in 1997 and has had the steepest decline).