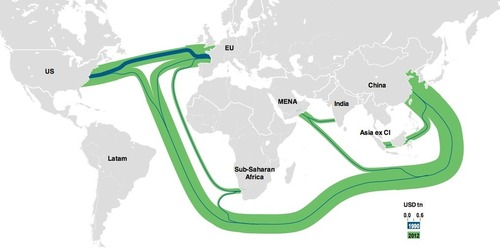 “China is a true mega-trader — a position last held by colonial Britain, with trade significant not only as a share of world trade (11.5%) but also of its own GDP (47%).  The U.S. is China’s top export destination. China’s trade with Latin America has risen more than 200 times since 1990 and is the fastest-growing corridor. China’s trade is beginning to slow, however. Exports accounted for about 25% of GDP in 2012, down from 35% in 2007.”

This article is highlights what we already know; China is a dominant force in global trade (although the map should be centered on the Pacific to show China’s real shipping lanes and interregional connections).  Containers are symbols of global commerce that enable economies of scale to be profitable and the outsourcing of so many manufacturing jobs to developing countries (almost 90% of everything we buy arrives via ship).  The invention of these containers have changed the geography of global shipping and the vast majority of the world’s largest ports are now in East Asia.