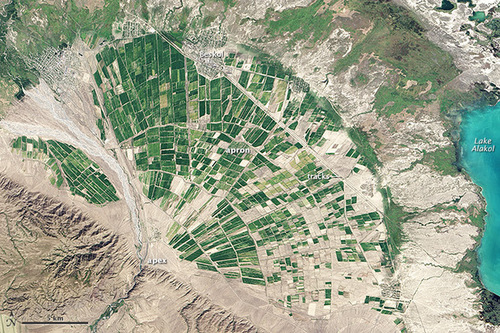 When streams emerge from mountains, they often spread out and deposit sediment in a distinctive pattern known as an alluvial fan.

In dry areas of interior drainage (such as Central Asia and the Great Basin in the U.S.), the human settlements are often clustered along the foothills of the mountains near landforms called alluvial fans.  Take time to analyze this image (and this one as well); in alluvial fans and the agricultural patterns that people create on them, we can see some striking geometric and spatial configurations that show how human settlements are highly dependent of the physical environment.